Hello everyone,
Last month I met up with my fellow charity shop lovers Donna, Charlotte, and Jenni, in my home away from home, Preston.
Last summer we met up in Ormskirk for a successful day of thrifting so we thought it was about time we did it again! 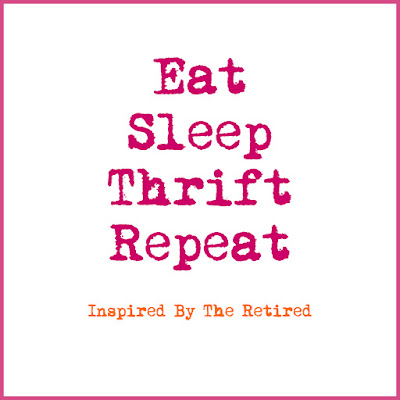 In my personal opinion, I think the charity shops on the outskirts of Preston are much better than the city centre ones so we jumped in a black cab and headed to Tulketh Mill. Firstly we went to Barnardos where we found a few bargains. I had a strict list to guide me-which I later completely ignored haha. In Barnardos I picked up a mustard, ribbed roll neck jumper. I'm obsessed with mustard at the moment and so are the rest of the gals!

They have a huge Sue Ryder there which we perused for ages. The vintage section was brilliant and they had lots of items on the £1 rail too. I found a lovely vintage St Michael midi skirt. It's electric blue and A-line shape for a bargain price of £2.75, I think it would've been more if it was on the vintage rail but it was just in with all the high street skirts so I did well there! We all hovered around the craft tables, lots of back issues of Molly Makes and huge collections of buttons was enough to get us all in a crafty state of mind. I think we all came away with purchases from Sue Ryder.

I can't remember the name of the next charity shop but I think only Jenni found a bargain in this one as it was a bit more expensive and there were signs saying no photography which we thought was odd. Anyway, the shop looked lovely but it wasn't our day there.

Unfortunately, the other three charity shops on that road were closed. We presumed that they would find it difficult to find willing volunteers to open on Saturdays. Plus one of my favourite charity shops on that road had completely closed down :(
As it was raining we decided to get a taxi to Plungington road, the next street of bargain charity shops.
When we rung a taxi they said it would be 20 minutes so we decided to hop in the pub for a swift half pint and a natter. Anyway, as soon as we ordered our drinks the taxi turned up and wasn't best pleased. So we decided to stay in the pub a little longer and catch up.
We then used a different taxi company and went on our merry way to Plungy (as the locals call it!)

I used to live on Plungington in my uni days so I was a regular to the charity shops. Cancer care on the corner used to be my fave with lots of vintage pieces for under £3 plus regular half price sales! This time I didn't find anything but Charlotte seemed to find lots!
Again as we moved on another of the charity shops on the list was closed. Age concern was next. I never used to find anything in this little shop and that day it was no different. Jenni found a cute little vintage dress with Doris written on the label but after much deliberation, she decided to leave it behind.

Next up was Salvation Army, I always used to find fab vintage items in here too. As I was flicking through rails I found the most beautiful, paisley bomber jacket. It's a corduroy material with mustard, olive and burnt orange tones. Ideal! The only thing was it was on the hanger with a matching waistcoat which I knew I would never ever wear. So at the till I politely asked if I could just take the jacket for the princely sum of £3 which was the price for both. Outright the man said no, that wouldn't be possible coz they had to go as a set or he'd get told off. In my head what does it matter if you separate them, the next person to come along and see the waistcoat would never know there was a beautiful matching bomber jacket, who even wears a waistcoat and a bomber jacket together?!
So after a while, he agreed to sell me just the jacket for £2, so that was strange but a huge bargain!
When we got out the shop I asked the rest of the ladies if it was unreasonable to separate items in that case. We all agreed that if you're getting more money and more stock that why wouldn't you. Obviously some things are meant to go together but in this case, it was very random!

Feeling rather hungry at this point (it was coming to 3pm time flies when you're thrifting!) we decided to go to my favourite place in  Preston, The Ferret!
This used to be my local and although it's been revamped since it's grunge gig days it's still brilliant. Plus now they offer lots of delicious food and 5 vegan options-wowza!
So I opted for a chickpea something (memory fails me!) and an Old J rum. Totally delicious and the rest of the gals really enjoyed it too.

With our bellies full and our purses almost empty we waddled into town to check out the city centre charity shops. I think we were all pretty much thrifted out at this point as I don't remember anyone snagging any bargains. We said our goodbyes and after a little Starbucks coconut milk latte I headed to catch my train!

It's always so lovely to catch up with Charlotte, Donna & Jenni, we all love charity shops and second-hand yet we all have totally different styles which makes it more fun. Plus it's blogging that's brought us all together. I definitely can't wait for our next thrifty date :)


Have you found any amazing charity shop finds lately?
Thanks for reading :)
Rachelle xx